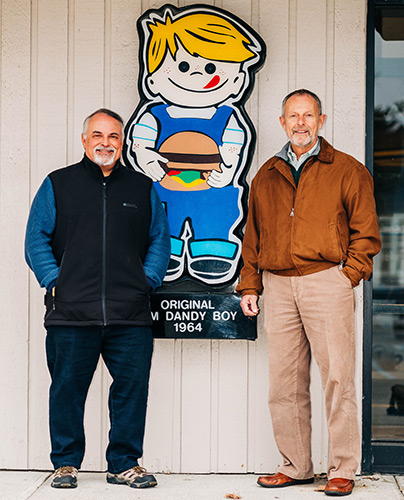 In 1964, he built and opened the first Jim Dandy Drive-In in Noblesville and changed the Riley Park Drive-in into an official Jim Dandy location. In 1966, the A&W in Tipton was torn down and replaced by a third Jim Dandy Drive-in. The Noblesville and Tipton Jim Dandys offered curb service, where customers ordered by service-phone speakers from their cars, and “curb girls” would deliver the food to the cars. That service ended in the late 1980s and has been replaced with Curbside To Go business, an adaptation that has worked out very well.

Harry’s sons, Dave and Brent Reasner (pictured above) have retained the family heritage over the Jim Dandy locations, and strive to keep things as originally conceived. They have maintained the philosophies of operation and community involvement that have led to the success of the restaurants over their more than 55 years. 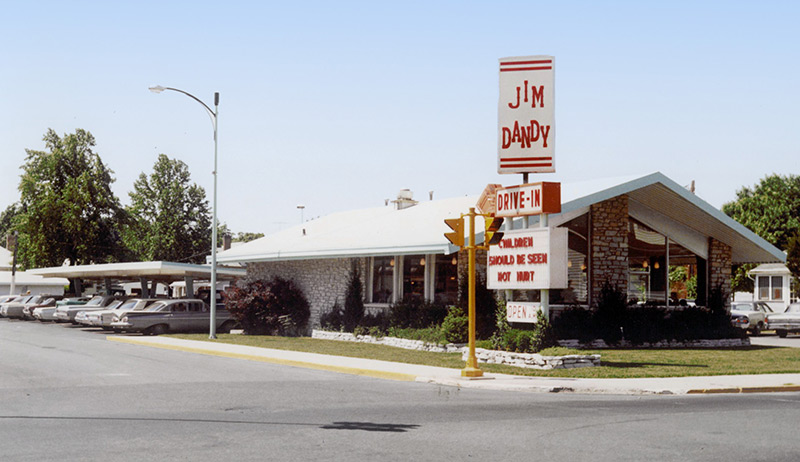 A major part of the community involvement philosophy is the “Fundraiser Night” program in all locations, during which they donate a portion of net sales to school groups, charities, church groups, and other local organizations.

Another important aspect of the success of Jim Dandy Restaurants has been a large number of long-term employees who have helped create a family feeling for other staffers as well as guests. Gary Sampson of Noblesville, for example, Vice President of Marketing for J.D. Restaurants, fried the first burger at the first Jim Dandy while in high school in 1964, and continued doing so through college. Since that first burger, more than 10 million guests have eaten at the restaurant, Sampson estimates. There are many more long-term employees, including servers who have been with Jim Dandy for more than 40 years. 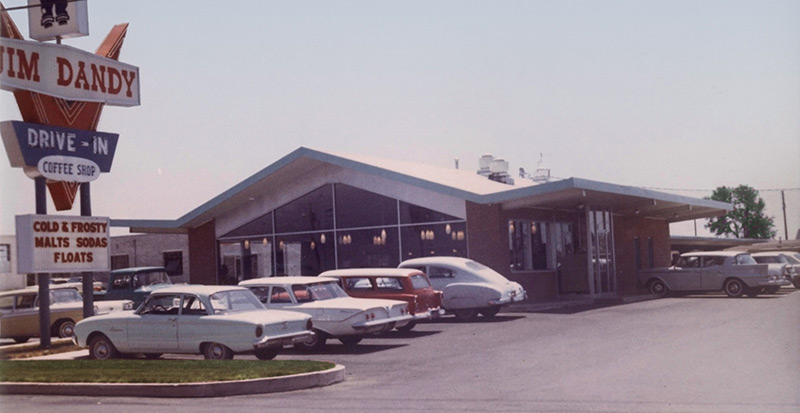 A menu including a number of excellent family recipes is yet another part of the continued success of Jim Dandy Restaurants including family recipes for vegetable soup, ham and bean soup, and chicken noodle soup. The most well-known item since 1964 is the double-deck burger, the Jim Dandy, which includes the famous Jim Dandy sauce. Another very popular item is the world-famous coleslaw. “We have had people come back from living in California and other places, to come to buy our coleslaw by the gallon,” Brent Reasner said. According to the owners’ research, Jim Dandy has made more than 350,000 gallons of coleslaw since 1964.

In 1970, Jim Dandy began selling Broasted® Chicken, which has become a large part of their sales today. Jim Dandy has become known to locals in their communities as a place to gather to share good food, good friends, and good times. Jim Dandy Restaurants are open for breakfast, lunch, and dinner daily, with breakfast served all day. Dining rooms are open and Jim Dandy foods can be purchased for carry-out and through contactless Curbside To Go service.